about the book | excerpt

A lesson in love…

Sir Gareth Locke lost an arm at Waterloo. He’s in love with his new bride—but he’s dreading their wedding night. He knows it will be an ordeal: clumsy, awkward, and mortifying.

Cecily Locke knows what to expect in the marriage bed—after all, she’s been married once before. It will be uncomfortable and a little messy, but over quickly enough.

AT SIXTEEN, Cecy had married her childhood sweetheart, Frederick Dunn. Two weeks later, he’d been hit by a falling roof tile and she’d become a widow. Now, at twenty-five, she was a bride again.

It was the oddest feeling to be married again, a heady combination of emotions. Joy was predominant, a deliciously buoyant sensation that she’d felt from the moment Gareth had proposed, six days ago. Cecy had tried to conceal the joy from her employer. Lady Marchbank hadn’t liked joy or laughter or exuberance. Nor had she liked Cecy’s handing in her notice. “Deserting her,” in Lady Marchbank’s words. Cecy had hidden her happiness, creeping along the dark corridors of Creed Hall, enduring the scolds and the displeasure, counting down the days, hours, and minutes until Gareth returned with the special license, and in the moments when she’d been alone, when there’d been no one to see her—not Lady Marchbank or any of the servants—she’d allowed herself to walk with a bounce in her step, and it had felt as if she might actually become airborne.

Now, on her wedding night, seated at the dressing table in her bedchamber, she felt almost light enough to float out of her chair. I am married. Married to a man I love. The joy bubbled up again, and alongside it was sheer, utter relief, because she’d thought it would never happen—a love match—not given her age and her poverty and the fact that she’d been working at Creed Hall, surely the grimmest, gloomiest, most isolated house in England.

Cecily stared at herself in the mirror. This is actually me. Lady Cecily Locke.

Cecy pinched herself, an actual pinch, not merely a mental one. Can this really be true? I’m married?

But yes, the pinch hurt, and yes, it was true. This was her life now: Gareth Locke’s wife.

Cecy gazed around the bedchamber. She had slept in inns before, but never in a room this nice. A lady’s room this, not a lowly nurse-companion’s. The candles were beeswax, not tallow, and the bed was piled high with soft pillows and there were pretty knickknacks on the mantelpiece. Outside it was bitterly cold, the longest night of the year almost upon them, but the snug shutters and the chintz curtains and the blazing fire kept winter at bay.

Cecy was tempted to pinch herself again. This can’t be true.

The buoyant joy surged again, and on its heels, the relief. Relief that she had a husband she loved. Relief that—for the first time in her life—she had financial security. Money was important, and perhaps it was a shameful, shallow thing to admit, but it was true. Any orphan who’d lived with an impoverished great-aunt knew it. Any wife who’d been unable to pay for a beloved husband’s funeral knew it. And any widow who’d been forced to work for her living knew it.

Cecy thought about Frederick, buried in his pauper’s grave. And then she thought about Gareth, who was alive—if somewhat battered. Gareth, with his lean, tanned face and his kind eyes. Gareth, with his amputated arm. Gareth, who’d suffered enough these past months. Protectiveness surged fiercely in Cecy’s breast. She wanted to stand between Gareth and the world, to shield him from further hurt, to make him smile, make him laugh, to fill his life with happiness. And children. Lots of children.

Cecy glanced at the wide, soft bed again. Gareth had suggested they postpone consummating their marriage until the journey was over, but she’d refused. Physical congress was part of marriage, and if it was the part a wife liked the least, it was also the part a husband liked the most; she knew that from her brief marriage to Frederick, and she also knew that the act of copulation would be over quickly. A few minutes of discomfort, a little mess afterwards, and that would be it for the night. What wife who loved her husband would balk at that? Especially if it gave her husband pleasure—and if it could bring them the children they both craved.

Cecy closed her eyes and sent up a little prayer: Please, Lord, bless us with children. She glanced at the door that connected her bedchamber to Gareth’s, and then at the clock on the mantelpiece. Gareth had said he’d knock on her door at ten.

It was only half past nine. Perhaps when she wore the clothes of a baronet’s wife, not those of a nurse-companion, it would take her half an hour to undress, but tonight that task had been completed in a matter of minutes—stripping out of the gray dress and the threadbare petticoat, the half-stays and the chemise, and donning her nightgown.

Cecy gave the clock one last glance and turned her attention to the journal she was writing. Not a journal for herself, but for the daughters she hoped to have, so that if she died before they were wed they wouldn’t go into their marriages as ignorant as she’d been.

Do not fear the marriage bed, she wrote firmly. While it is natural to feel shy and nervous, strive not to be afraid. The first time is a little painful, but thereafter it should merely be uncomfortable. As for the act of copulation, it is over swiftly. Your husband will use his hand to position his organ between your legs, then he will push it inside you a few times until he releases his seed in your womb, whereupon he will withdraw. The intimacy of the act will likely embarrass you at first, but you will soon come to regard it as commonplace. It is a little messy, though, so you will need to wipe between your legs afterwards with a handkerchief. Do not be disgusted by this. It is entirely natural.

There, the sort of practical knowledge she wished she’d had on her wedding night with Frederick.

What else did she wish she’d known then? Advice her long-dead mother had been unable to give her.

Cecy tapped the quill against her lips and thought for a few minutes, and began to write again.

We are formed so that men enjoy copulation and women do not, so don’t be disappointed that you don’t experience the throes of pleasure that your husband does. A wife learns to enjoy physical congress for her husband’s sake. If he loves you and has a kind heart then he will not prolong the act.

Cecy reread those lines, and hesitated over “learns to enjoy.” Should she cross it out and write “accustoms herself to” instead? There was no physical enjoyment for women in the marriage bed and she didn’t want her daughters to have false expectations. She chewed on her lower lip for a moment, and then wrote: While you won’t experience bodily pleasure in the marriage bed, you will experience emotional pleasure in knowing your husband enjoys copulation, and in knowing that a child may result from your union.

Cecy glanced at the clock. Still fifteen minutes to wait.

She looked at what she’d written. “It is natural to feel shy and nervous,” she read aloud. Advice for her daughters—but at this moment, advice for herself. Because she was a little nervous, and she was feeling shy, and that was natural.

“The intimacy of the act will likely embarrass you at first, but you will soon come to regard it as commonplace.” Cecy read that sentence out loud, too, and huffed a faint, wry laugh. Embarrassing? Yes, it would be embarrassing this first time, and probably more than a little awkward. But she and Gareth would get past that moment together.

Don’t be anxious about your wedding night, Cecy wrote in the journal, to her daughters and to herself. It is a necessary . . .

A necessary what? Hurdle? Obstacle? Challenge?

Cecy didn’t like any of those words, with their connotation of doing something unpleasant. She wanted a neutral word.

Don’t be anxious about your wedding night. It is a necessary event. Every husband and wife must have one. 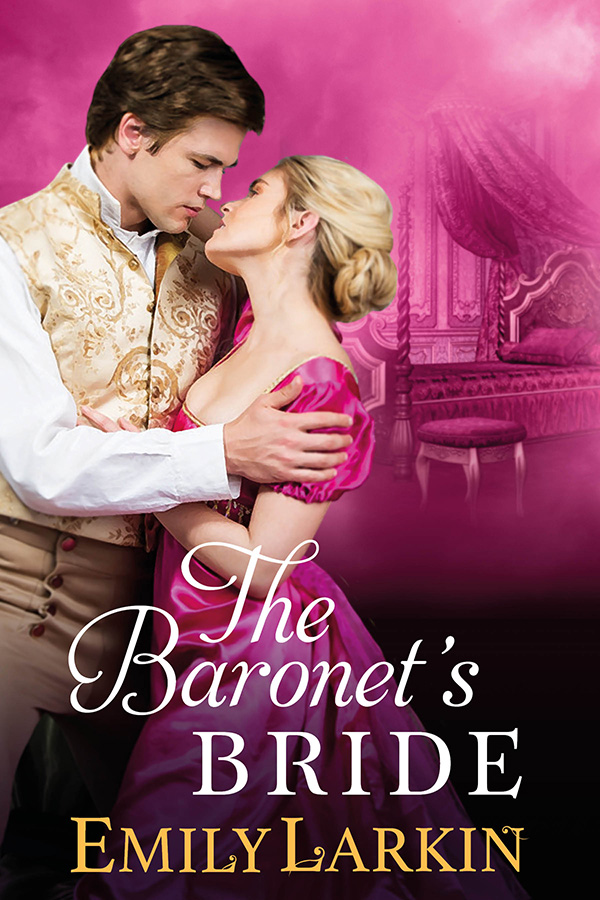