It is a truth universally acknowledged, that Faerie godmothers do not exist…

about the book | excerpt

Who will she choose to save?

Ivy Miller has been lame most of her life—but in a few days’ time she’ll receive a Faerie wish, to use as she likes.

But Ivy’s sister isn’t the only person in desperate need of rescue. A man trapped in the shape of a deer emerges from the forest. Can Ivy break the agonizing spell that binds him?

Ivy has only one Faerie wish—but many choices.

A dark and magical tale of courage, love, and difficult choices.

Receive a free digital copy of The Fey Quartet when you join my Reader’s Group.

IN THE NORTHERN reaches of England lay a long and gentle valley, with villages and meadows and wooded hills. Dapple Vale was the valley’s name, and the woods were known as Glade Forest, for many sunlit glades lay within their cool, green reaches. Glade Forest was surrounded by royal forest on all sides, but neither it nor Dapple Vale were on any map, and the Norman king and his foresters and tax collectors and huntsmen knew nothing of their existence.

Within the green, leafy expanse of Glade Forest lay the border with the Faerie realm, where the Fey dwelled. The boundary was invisible to the human eye; nothing marked it but a tingle, a lifting of hair on the back of one’s neck. Wise men turned back when they felt the tingle, and unwise men continued and were never seen again.

Despite its proximity to Faerie—or perhaps because of it—the sun shone more often in Dapple Vale than elsewhere in England, and the winters were less harsh. The Great Plague bypassed Dapple Vale, and the Great Famine, too. Crops flourished, animals were fat and sleek, and the vale’s folk were hale and long-lived.

One road led to the vale, but few travelers discovered it. No Romans found Dapple Vale, nor Vikings, and England’s latest invaders, the Normans, hadn’t found it either. Even folk born and bred in the vale had been known to leave and never find their way back, so well hidden was Glade Forest.

The folk of Dapple Vale didn’t take their good fortune for granted. They had heard of plagues and famines, heard of marauding soldiers and starving serfs and murderous outlaws. Each was careful to respect the forest that sheltered them, and most careful of all was the Lord Warder of Dapple Vale, who went by the name Dappleward. Dappleward and his sons and his liegemen, the Ironfists, knew the location of rings of standing stones where the Fey had danced in olden times. They knew where to find the great stone barrow that held the grave of a banished Faerie prince, and they knew of the dark and narrow crevice wherein lay a hoard of abandoned Faerie gold. They knew these places, and guarded them carefully.

ALL TALES MUST have a beginning, and our tale begins in Dapple Bend, in the crook of Dapple Vale, where there once lived a miller’s widow and her three beautiful daughters. The widow was half-blind and half-lame, but she had whole-hearted courage, and when she came upon a Faerie babe drowning in a deep, dark pool in the forest, she flung herself into the water to save it.

Now the Fey are dangerous and capricious and cruel, and the folk of Dapple Vale know better than to attract their attention, but Widow Miller went searching for the border with Faerie and called the babe’s mother to her.

The Fey dislike humans, and dislike even more being indebted to them, and the babe’s mother was deeply in Widow Miller’s debt, so she granted the widow a wish, and each of her daughters a wish, too, and their daughters in turn.

Widow Miller entered Glade Forest half-lame and half-blind; she left it supple-limbed and clear-eyed and with a joyful heart, and two weeks later she married the blacksmith she had secretly loved for years.

Her three daughters were to receive their wishes on their birthdays, and those birthdays were soon. First to wish was the widow’s middle daughter, and she asked for the gift of finding people and things, and with that gift to guide her, she embarked on a hazardous journey, where she met Dappleward’s youngest son and won his love.

Second to wish was the youngest daughter, and alas, her wish went awry. But the time has not yet come to tell her tale.

Third to wish, as the long golden days of midsummer approached, was the eldest daughter, who was the wisest of the widow’s daughters, and who also was lame.

IVY LIMPED THROUGH the forest, leaning on her crutch. Her sister Hazel walked alongside her, a basket slung over one arm. Ahead, the derelict woodcutter’s cottage peeped through the trees, a lopsided building with crooked shutters and threadbare thatching. Ivy glimpsed her youngest sister, Larkspur, sitting on the mossy doorstep, two large red-brown hounds at her feet.

As if she’d heard Hazel, Larkspur turned her head and looked into the forest, directly at them.

She can’t see us yet or hear our voices, Ivy thought. But she senses us.

Hazel nodded, and picked up her skirts and ran ahead, the basket bouncing and swinging on her arm. “Larkspur!”

The hounds surged to their feet, barking.

Ivy hobbled as fast as she could, awkwardly navigated the gnarled roots of an oak, and came out into the sunlit clearing.

Larkspur ran to meet her.

Ivy hugged her sister tightly, while the hounds frisked around them like puppies.

Larkspur drew back. Tears were bright in her eyes.

Ivy smoothed Larkspur’s pale hair awayfrom her face. “How are you, love?” She didn’t need to say the words aloud; Larkspur could hear them just as clearly unspoken as spoken. “The cottage hasn’t fallen down around your ears yet?”

Larkspur shook her head. Her face was thin, her cheeks almost hollow, her skin translucently pale except for the dark shadows beneath her eyes.

This gift is killing her. Ivy tried to smother the thought, but it was too late. Larkspur had heard it. Her lips twisted in silent agreement.

“Five more days and it will be undone,” Ivy said.

Ivy limped across to the doorstep, and awkwardly sat, stretching out her stiff leg. Larkspur and Hazel sat, too. The hounds settled at their feet. This should have been a happy moment, sitting in the sunshine with her sisters, but it wasn’t; the silence between them was strained and anxious, tense with everything that lay unsaid between them.

I hate the thought of you sleeping here, alone.

“I’m not alone,” Larkspur said. “I have the dogs. It’s quite safe. You think I wouldn’t know if anyone was coming? How can I not know?” There was a bitter note in her voice.

Ivy put an arm around her sister’s thin shoulders. Don’t hate yourself, Larkspur. The Faerie tricked you. It’s not your fault.

She glanced at Hazel. Hazel was silent and tight-lipped. Ivy didn’t need to have Larkspur’s gift to know that she was angry.

“It’s not your fault,” Hazel said flatly. “It’s that bale-tongued creature’s, and I’ll kill her if I—”

Hazel shut her mouth, but anger still blazed in her eyes. Larkspur would be able to hear it. No wonder she’s going mad.

“You think I’d rather be without my sister than my crutch?” Ivy shook Larkspur gently. “Silly. Of course I wouldn’t!”

“I wanted you to walk.” Larkspur’s voice broke on the last word. She began to cry.

Both hounds sat up, anxious.

Ivy tightened her arm around Larkspur’s shoulders. “I’m used to this leg of mine. I never thought I’d be able to walk properly.”

“You did think so for the last month,” Larkspur sobbed.

“And not for the past twenty-one years,” Ivy said firmly. “Stop crying, love. It’s upsetting the dogs.”

Larkspur drew in a shuddering breath and wiped her eyes with her sleeve.

The misery on her face tore at Ivy’s heart. “I love you,” she said. “And when my birthday comes I shall be glad to use my wish for you. It will give me more joy than anything else could.”

“Eat,” Hazel said abruptly. “I want to see you eat something.” Her voice was rough and her eyes suspiciously bright. She’s trying not to cry.

“Eat!” Hazel shoved the basket towards Larkspur, her face fierce.

Larkspur obediently rummaged in the basket. She pulled out a slice of rye bread and nibbled on it.

They sat in silence while Larkspur ate. Ivy tried to bury her worry, so Larkspur wouldn’t sense it. She focused on the little clearing, on the summer-green grass and the buttercups nodding their bright heads in the faint breeze, on the warble of birdsong. Such a beautiful, golden summer’s day. Not long to her birthday. Five days. Five days until she received her Faerie wish.

Larkspur’s wish had been a disaster. But mine will wipe it out. All will be well again.

Larkspur finished the piece of bread. She rubbed her fingers on her skirt. “When Mother and Ren return from Dapple Weir . . .” she said, and then fell silent.

Ivy exchanged a glance with Hazel.

“We can’t hide this from her,” Ivy said gently.

“She’ll be so upset.” Larkspur pressed her hands to her head, her fingertips whitening with the pressure. “I couldn’t bear it if she came to see me!”

“We shan’t bring her,” Hazel said hastily. “I promise.”

Ivy nodded. I promise, too, she said silently.

Larkspur lowered her hands. Her face was wan and miserable. “I wish—” She stiffened, and lifted her head, and stared intently at the forest. “There’s a man coming.”

Hazel stood hurriedly. “Someone we know?”

Ivy reached for her crutch and levered herself to her feet. “Whoever he is, we know he’s not an outlaw.”

Hazel cast her a grim look. “You think every man in the vale is trustworthy?”

“No. But I don’t think there’s a man in Dapple Vale foolish enough to go up against Bess and Bartlemay.”

Both hounds were on their feet, ears pricked and alert.

“Maybe,” Hazel said. “Maybe not.” She ducked into the cottage and emerged with a thick wooden stave in her hand.

“Something terrible has happened to him.” Larkspur pressed her hands to her temples as if trying to push the man’s thoughts out. “He’s mad with panic.”

“Is he dangerous?” Hazel demanded.

Ivy heard the crackle of someone blundering through the undergrowth. Bess took a stiff-legged step forward, her hackles up, a low growl rumbling in her chest.

“He’s terrified.” Larkspur’s eyes were squeezed shut, her face set in a grimace.

“Then he needs our help,” Ivy said. “Bess, Bartlemay—down!”

The hounds obeyed her, but their hackles didn’t lower, nor did their growling abate.

The snap and crack of breaking twigs came closer. Ivy saw a dark shape lurch between the tree trunks. She gripped her crutch tightly. There’s nothing to be afraid of, she told herself firmly. Whoever this man is, he needs our help.

But the creature that burst into the clearing wasn’t a man. It was a deer.

Ivy stared at the animal. It was a young roebuck, chest heaving, eyes showing their whites, staggering, clearly close to collapse.

Hazel lowered her stave. “That is not a man.” 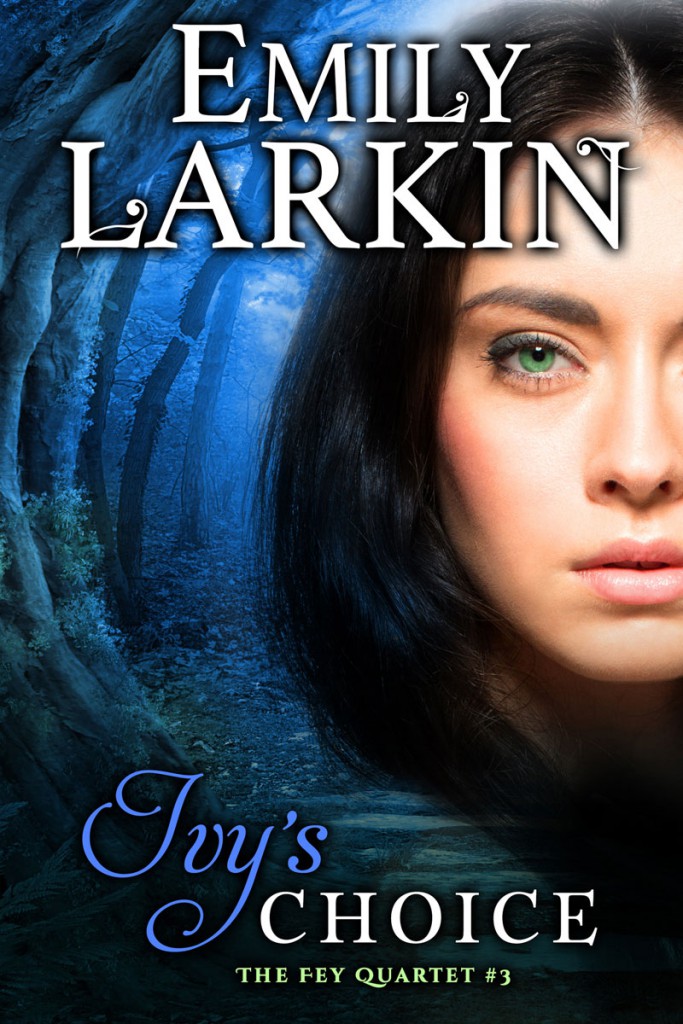